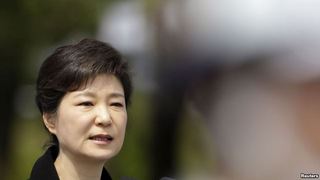 President Park announced the plans to create a blue print for reuniting South Korea with the North on Tuesday.

In a televised speech marking her first year in office, Park said she would form a preparatory committee directly under the presidential office. She said the committee will expand dialogue and private exchanges with Pyongyang.

She also said the committee will allow all levels of society to participate, including experts in diplomacy, security, economics, sociology and culture, and private organizations. In this way, she said, they will create a national discussion on reunification and make a concrete blueprint of a 'unified Korean peninsula'.

The two Koreas have remained divided since World War II separated them into a Soviet-influenced North and an U.S.-influenced South.

Both Pyongyang and Seoul have reunification as a goal, but neither side specifies how they want it to happen, or under whose leadership.

Most experts agree the wealthy South would have to pay the costs of absorbing the impoverished North.

Park's Tuesday speech focused on a three-year plan for South Korea's economy, which she said will benefit from reunifying with the North.

Long ago, before Korea, she said, Germany reunified by preparing step by step.

But many analysts point out East Germany's income was only a few times smaller than West Germany's when they reunified. By contrast, South Koreans' incomes are 18 times that of North Koreans' and the South's Gross National Income (GNI) is 38 times larger than the North's.

That would amount to a total cost of close to $1 trillion; other estimates are even higher.

"If there were change in North Korea, in whatever kind of scenario you can think about. And, we move into a situation of transitional justice or dealing with mass migrations or displaced people and so on. There are many different scenarios that we can think about. But, in those cases, we don't have a legal framework," said Pinkston.

President Park's comments come as relations are improving between the two Koreas and after a week of rare reunions of families separated since the Korean War.

The two sides this month held the highest level dialogue in seven years, where they agreed to hold the family reunions and to avoid slandering each other.

The deal was seen as a significant concession from Pyongyang, which had been threatening to call off the reunions over joint South Korea-U.S. military drills.