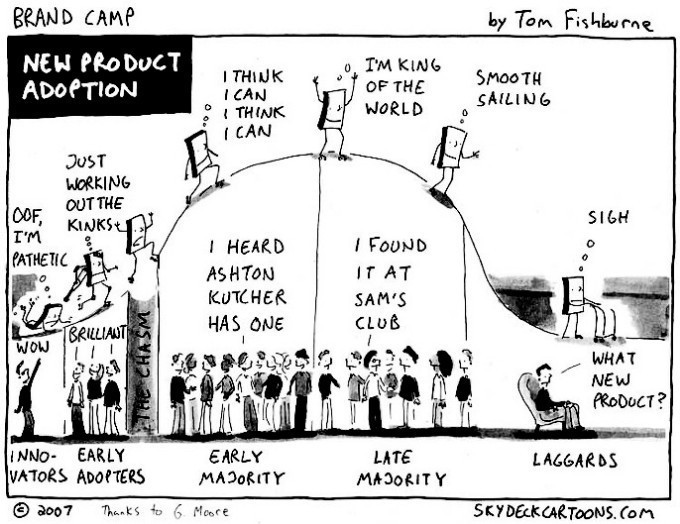 But why is it important to attract those who believe what you believe? Something called the law of diffusion of innovation, if you don't know the law, you know the terminology. The first 2.5% of our population are our innovators. The next 13.5% of our population are our early adopters. The next 34% are your early majority, your late majority and your laggards. The only reason these people buy touch-tone phones is because you can't buy rotary phones anymore.

We all sit at various places at various times on this scale, but what the law of diffusion of innovation tells us is that if you want mass-market success or mass-market acceptance of an idea, you cannot have it until you achieve this tipping point between 15 and 18 percent market penetration, and then the system tips.

I love asking businesses, "What's your conversion on new business?" They love to tell you, "It's about 10 percent," proudly. Well, you can trip over 10% of the customers. We all have about 10% who just "get it." That's how we describe them, right? That's like that gut feeling, "Oh, they just get it."

The problem is: How do you find the ones that get it before doing business versus the ones who don't get it? So it's this here, this little gap that you have to close, as Jeffrey Moore calls it, "Crossing the Chasm" - because, you see, the early majority will not try something until someone else has tried it first.

And, by the way, they didn't do it because the technology was so great; they did it for themselves. It's because they wanted to be first. People don't buy what you do; they buy why you do it and what you do simply proves what you believe. In fact, people will do the things that prove what they believe.

The reason that person bought the iPhone in the first six hours, stood in line for six hours, was because of what they believed about the world, and how they wanted everybody to see them: they were first. People don't buy what you do; they buy why you do it.

You should have success then. Look at TiVo. From the time TiVo came out about eight or nine years ago to this current day, they are the single highest-quality product on the market, hands down, there is no dispute. They were extremely well-funded. Market conditions were fantastic. I mean, we use TiVo as verb. I TiVo stuff on my piece-of-junk Time Warner DVR all the time.

But TiVo's a commercial failure. They've never made money. And when they went IPO, their stock was at about 30 or 40 dollars and then plummeted, and it's never traded above 10. In fact, I don't think it's even traded above six, except for a couple of little spikes.

Because you see, when TiVo launched their product, they told us all what they had. They said, "We have a product that pauses live TV, skips commercials, rewinds live TV and memorizes your viewing habits without you even asking." And the cynical majority said, "We don't believe you. We don't need it. We don't like it. You're scaring us."

What if they had said, "If you're the kind of person who likes to have total control over every aspect of your life, boy, do we have a product for you. It pauses live TV, skips commercials, memorizes your viewing habits, etc., etc." People don't buy what you do; they buy why you do it, and what you do simply serves as the proof of what you believe.


Now let me give you a successful example of the law of diffusion of innovation. In the summer of 1963, 250,000 people showed up on the mall in Washington to hear Dr. King speak. They sent out no invitations, and there was no website to check the date. How do you do that?

It just so happened that the Civil Rights Movement was the perfect thing to help him bring his cause to life. We followed, not for him, but for ourselves. By the way, he gave the "I have a dream" speech, not the "I have a plan" speech.

Listen to politicians now, with their comprehensive 12-point plans. They're not inspiring anybody. Because there are leaders and there are those who lead. Leaders hold a position of power or authority, but those who lead inspire us.