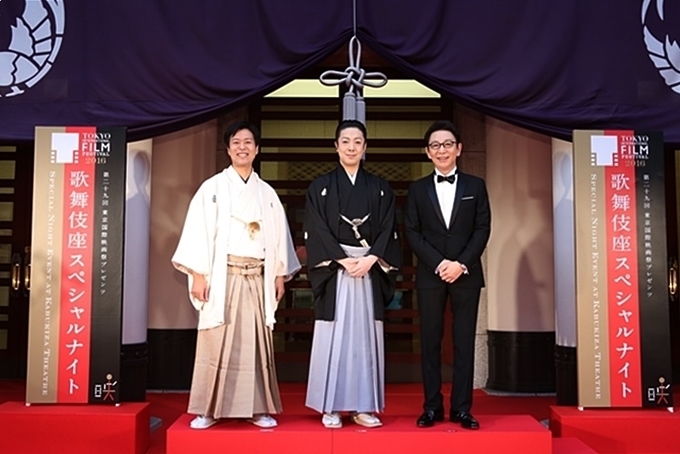 Ichiro Kataoka , Onoe Kikunosuke, Ichiro Furutachi（from left）
한국어 日本語
The Special Night Event at the Kabukiza Theatre attracted a formally attired crowd of international and local visitors on October 27 to the highlight of TIFF’s Japanese Classics section. Marking the third year of the event, which TIFF cohosts with Shochiku at the historic theater in Higashi Ginza, this was to be the first time that a kabuki star would perform in an onnagata (female) role, and the first time that the event would also feature a Japanese benshi narrator during the film screening.

Make that two benshi narrators — and two screenings. The recently rediscovered masterwork Chushingura was to be shown in a digitally restored version, along with Blood’s Up at Takata-no-Baba, featuring accompaniment by one traditional and one “new-style” narrator. Already an embarrassment of riches, the evening was to conclude with an enthralling performance of the dance masterpiece “Sagi Musume (Heron Maiden).”

During a photo call prior to the doors opening, kabuki actor Onoe Kikunosuke, “Mad Chatter” Ichiro Furutachi and professional benshi Ichiro Kataoka spoke briefly about the evening’s program. “’Sagi Musume’ combines the quintessence of all the features of onnagata dance performance,” promised Onoe. “I hope the audience is as excited as I am about my first experience performing the piece at Kabukiza. I had the privilege of being mentored for this by Tamasaburo Bando, who is the most famous interpreter of this role, and I will do my best to make him proud.”

Kataoka, a familiar figure at silent film screenings around the globe, commented, “I must disclose the secret that benshi are not really used to being in the limelight. We’re always off to the side. The beauty of our profession is that we narrate stories that took place long ago, and yet they fit comfortably into a modern context.”

As for the Mad Chatter, a renowned TV and radio personality in Japan, Furutachi admitted that he’s not a real benshi and, speaking at his usual Shinkansen speed, apologized in advance for “offending foreign journalists because I will be talking far too quickly for the interpreter to keep up with me.”

As the evening got underway, Furutachi appeared on stage to welcome the audience, and to deliver a sweeping, mile-a-second travelogue across Japanese history as it pertained to the two films being showcased. “I’m not sure what the main feature of the program really is,” he joked. “I had originally requested that I be allowed to dance along with Kikunosuke, but for some reason, they did not allow it. Still, tickets for tonight were only 10,000 yen, and for that amount, you get the Mad Chatter, you get a real benshi, you get a beautiful kabuki dance, and you even get a bento dinner box. Now that’s what I call cost performance!”

After lamenting that only 8 percent of Japanese silent films are still extant, Furutachi launched into his narration of the six-minute 1910 Blood’s Up at Takata-no-Baba. The film is already so fast moving that it’s dangerous to blink; but with Furutachi cracking one hilarious line after another (“When he gets home, he finds a text message on his mobile…and goes into the kitchen to carbo load before running out of the house to participate in the Tokyo Marathon…”), the overall effect was stunning.

Ichiro Kataoka then took to the stage, introducing the three musicians who would join him in creating the mesmerizing aural complement to the 1928 film Chushingura, directed by the “father of Japanese film,” Shozo Makino, and featuring Japan’s first movie star, Matsunosuke Onoe. The legendary tale of the 47 ronin who avenge their fallen master, the extraordinarily advanced film set the standard for all subsequent versions, with memorable scenes of the warriors captured in deep snow and a forest of pine. With Kataoka’s extraordinary vocal accompaniment and the propulsive musical score, the audience was transported back to old Edo.

In previous years, TIFF’s special kabukiza night featured programs that focused on tachiyaku, or male roles. But in this male-only theatrical form, the onnagata actors are often the most heralded, and Onoe Kikunosuke is no exception. Acclaimed in Japan and elsewhere for kabuki and other roles, the actor’s appeal was apparent from the opening strains of his dance piece.

The hugely popular “Sagi Musume” begins with a piercing melody and a light snow falling on a country scene. Suddenly, through the dusk, a maiden (Kikunosuke) in a pure white kimono arises from the frozen pond and begins dancing her sad tale of forbidden love. The spirit of a heron in human form, she has fallen in love with a man who later betrays her. In the blink of an eye, she changes her kimono and is suddenly in red, demonstrating the popular kabuki trick of hikinuki, when the top layer of kimono is pulled away to reveal the next. The maiden reminisces about meeting her love, and then, offstage, changes yet again, this time to a vibrant purple kimono. Dancing with hand gestures in a style called teodori, she laments the man’s coldness. Another quick costume change, into orange, and as the snow falls more heavily, she begins spinning her parasol in an agony of grief. One last hikinuki, and the maiden has transformed back into a white heron. She unfurls her wings in anguish and finally collapses into the snow. Almost as one, the audience burst into extended applause. Hoping the enchantment would last a little longer, they then lingered in front of the magically lit theater, before making their ways into the Tokyo night.
【Tokyo International Film Festival 2016】Asian Three-Fold Mirror 2016: Reflections Press Conference
【Tokyo International Film Festival 2016】29th Tokyo International Film Festival kicks off
【Tokyo International Film Festival 2016】ARIGATŌ Award for Contributors to the Japanese Film Industry
【Tokyo International Film Festival 2016】Japan Now
【JWLI 2016 TOKYO Summit】Women Leading Social Change in Japan
【2016 Multicultural Exchange Festival in Tokyo】Let's share cultures and strengthen bond among nations!
【The 66th UN DPI/NGO Conference】Korea to Host UN DPI/NGO Conference in Gyeongju, 30 May－1 June
【DAFZA】DAFZA Held Series of Seminars to Attract More Japanese Investments into UAE
【World Bank】World Bank/IMF 2014 Spring Meetings:"You Can Be the Generation to End Poverty"
【Africa】Chinese Premier Li Keqiang takes wife on state visit to Africa for first time
【I Have a Dream】Speech by Martin Luther King -한국어-
【UN】UN Secretary General Ban Ki-moon to participate in World Bank, IMF spring meetings
【World Bank】"Climate change will lead to battles for food", says head of World Bank
【IMF】JAPAN IMF WORLD BANK ANNUAL MEETINGS
【IMF】IMF 2012 TOKYO ANNUAL REPORT (PART Ⅱ)
【London Summit on nutrition】Ban Ki-Moon - video message to the London Summit on nutrition
【People】2013 World Food Prize Laureate (Robert T. Fraley, Marc Van Montagu, and Mary-Dell Chilton)
【Africa Day】Africa Day in New York, June 26, 2013
【Global Conference】Milken Institute Global Conference 2013
【Russia】Putin has no intention to make any military move into Ukraine
【UN】Ban Ki-moon concerned about the Uganda gay law
【Syria】Fact finding mission in Syria to start immediately-Ban Ki-moon
【London Olympic】BRITAIN LONDON 2012 OLYMPIC GAMES ロンドン2012オリンピック 런던 2012 올림픽