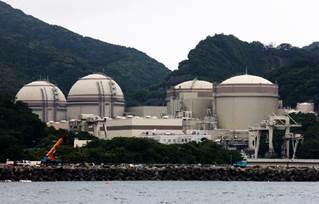 Japan stopped nuclear power plants "Oiigenpatsu"
of Kansai Electric Power Co., Inc. on September 15
Korean Japanese
Japan took the last of its 50 once-vital nuclear power stations offline last Monday. But despite having one of the hottest summers on record, Japan has had no power rationing or blackouts this year. How did they do it? Put simply, the country cut back.

"Japan's nuclear reactors have mostly been replaced by post-catastrophe efficiency gains which reduced [energy] consumption by around 15-20%," says Kevin Meyerson, a retired American businessman and now an energy conservationist living in Japan. Cutting energy demand by 10% across the board in Japan has eliminated the need for about 14 nuclear reactors, according to government figures.

Leading the charge to unplug are major corporations like Komatsu, the world's second-largest construction equipment manufacturer, which has pledged to cut its energy consumption by at least 50% by 2015.

Komatsu has replaced power-hungry pneumatics with battery-powered tools, for example -- and introduced other power-saving technology. The firm has also installed solar panels on the rooftops of its buildings and is working on finding ways of taking advantage of renewable energy, such as using underground water as a coolant. Komatsu also plans to invest 30-40 billion yen by 2020 to rebuild its aging plants and replace them with factories and offices that can save energy by employing LED lighting. A 60-watt type LED uses about one-eighth the power that a 60-watt incandescent bulb uses, and is a technology that is improving exponentially each year.

Panasonic's solar panels have achieved the world's highest conversion rate for turning light into electricity. The efficiency of its new silicon wafer solar cells does this at a rate of 24.7%, where previously the average was around only 10%. Hitachi, Fujitsu, and NEC, meanwhile, are jointly developing next-generation semiconductors they hope will operate by 2019 that will require just one-tenth of the power consumed by present-day devices.

Keen to encourage further energy savings, Japan's government has set new targets for the nation's domestic appliances. Energy efficiency is now required for over 20 different types of electronics. Such rules will get stricter. Air conditioners in Japan, which are 68% more energy-efficient today than they were in 1998, are now required to become twice as efficient by 2020.
【Fin】Wearable Ring Make your Palm as Numeric Keypad and Gesture Interface
【Sports】TOKYO2020 FINAL Presentation FILM